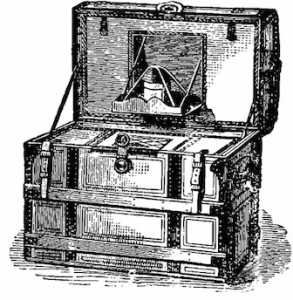 From How to Travel: Hints, Advice, and Suggestions to Travelers by Land and Sea All Over the Globe, by Thomas W. Knox, first published in 1881:

There is no pleasanter steamship life anywhere than in the East, so far as the associations are concerned. The brainless idiots that add a pang to existence on the transatlantic voyage are rarely seen so far away from home as the coast of China; the majority of the people you meet there are the possessors of at least a fair amount of intelligence, and know how to use it. Among twenty passengers on a steamer, you will find three or four globe-trotters, like yourself; as many merchants; as many clerks and other employés of Eastern houses; two or three men who have been or still are in the consular or diplomatic service; a banker or two; two or three soldiers of fortune who have been serving one of the Oriental governments in one way or another; and the balance will be made up of nondescripts, who cannot be classed in any regular list. If there are any of the gentler sex, they will be the wives, widows, sisters, or daughters of men who have been making a home in the East; and you will occasionally encounter some of them who have made a dozen voyages back and forth, and know every wave of the sea along the route. The great majority of the passengers are sure to have had sufficient attrition against the world to wear away their rough corners; you will find them social without forwardness, and communicative without being garrulous.